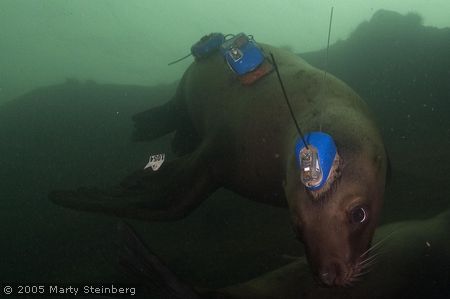 For the last five years I've been traveling to Hornby Island, BC to dive and play with the Stellar sea lions that migrate there during the winter months to wait to feed on the annual herring spawn. They are an incredibly friendly bunch who are accustomed to divers visiting and interacting with them.  This year we ran into one special pup who appeared to be "instrumented".  The dive lodge owners were aware of the animal, but not aware of any studies under way in their area at the time. I sent some photos of him to Donna Gibbs at the Vancouver Aquarium whom I had met on previous specimen collecting trips in British Columbia and asked if she had heard of any studies going on at Hornby. She had not but told me she'd ask around the local marine biologists' community. A month later I received a response from Peter Olesiuk from the Canadian Department of Fisheries and Oceans.  Turns out the blue headed guy I ran into on Hornby was one of twelve instrumented animals that are part of this year's study on foraging behavors. Peter generously gave his time to explain the details of the study to me by email.  I have found the information on the behaviors and travel patterns of these guys so interesting from Peter's study that it makes you look at sea lions in the water in a whole new way, curious how long they've been at their current site and how far they've traveled in the last few months.  Below is the full context of Peter Olesiuk's combined mail thread on the study. More images from the trips can be found here.


I am a marine biologist specializing in marine mammals, and along with my colleagues Steve Jeffries from Washington Fish and Wildlife, and Andrew Trites from University of  British Columbia, are conducting a study on foraging behaviour of Steller sea lions.  We deployed instruments on 12 Steller sea lion in January at Norris Rocks off Hornby Island this year.  Our goal is to determine how foraging patterns vary between sex- and age-classes, which will hopefully lead to a better understanding of why populations in Alaska have been declining.  A leading hypothesis is that young animals are nutritionally stressed, especially if high-quality energy-rich prey are unavailable.  The instruments we deployed include a back-mounted recorder that monitors feeding activity (indicated by stomach temperature transmitted from a pill in the stomach) that will be released after two weeks (we've already recovered that package from the animal you photographed), another back-mounted time-depth recorder that is monitoring haulout and diving patterns, which we will plan on releasing and recovering in April, and a head-mounted satellite tag that is providing information on movements.  The instruments are colour-coded, and the animal you photographed off Hornby is our smallest animal - a 222 lb fellow about a year-and-a-half old that is still nursing.  Compared to older animals, our preliminary finding suggest these young dependent animals, and their mothers, may be less mobile than other sex- and age-classes, and thus more limited in their ability to take advantage of locally and seasonally available prey resources.  These young animals and their mothers seem to hang around the same area for extended periods, where we've had other animals move hundreds of kilometers (two have almost circumnavigated Vancouver Island).
By the way,there is also a branded Steller sea lion in the photos - 145Y.  The animal was branded as a pup on Rogue Reef off Oregon in July 2003 by my colleagues with ODF&W (Oregon Dept of Fish & Wildlife).  I'm keeping track of resightings for them and will pass this one along.  They are tracking the branded animals to determine survival and reproductive rates, and we are also learning much about movements. Interestingly, moms with young animals tend to disperse quite far from rookeries where they breed, but then the youngsters tend to park on a particular haulout site while mom is off foraging.

It will be a while before our study is complete and all the information processed.  We tagged 12 sea lions this year, and hope to do 12-15 again next year.  The attached map shows the locations received by satellite (yellow indicates at-sea locations, and red indicates on land, with larger circles representing more accurate positions).  As you can see, the main foraging area has been in the northern Strait of Georgia, where herring stocks have been staging in preparation for spawning.  One of our goals is to monitor sea lion movements as the herring spawn and disperse, and sea lions switch to other prey.  The complete story won't be told until we recover the time-depth recorders in April, which will provide very detailed information on diving and haulout behaviour (at 10 sec intervals over a period of several months!). Although most of the animals have been foraging in the northern Strait of Georgia, you'll notice a few positions out on the west coast.  These represent the longer-range movements of two subadult males. One headed south out through Juan de Fuca and up the west coast of the Island and is currently sitting at Hope Island off the north tip of Vancouver Island.  The other headed north through Johnstone Strait and then down the west coast of Vancouver Island, and is currently sitting at Cape Alava off the Washington coast. Interestingly, these  animals seem to know where all the traditional haulout areas are situated, and make frequent stopovers at them. 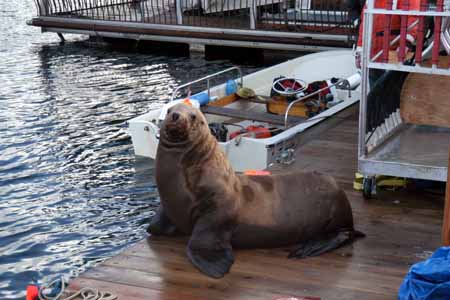 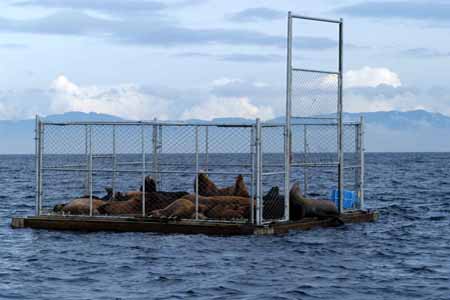